Who doesn’t want to study in an IIT? The elite educational institution in the country offers a world-class education, in turn, paving the way for the student to get highly paid jobs anywhere in the world. An IITian has a status and identity in society. Only a selected few from the top segment of the rank list can expect admission into the top IITs in India.

To choose the IIT of your choice, it necessitates matchless dedication and devotion, besides support from an established coaching centre. We are enumerating here the top IIT colleges in India to help you select the top 1 if you manage to reach the chosen ones. The list has been prepared based on the National Institutional Ranking Framework (NIRF), an initiative by the Ministry of Education, Government of India, to identify the top-performing colleges in India.

NIRF uses laid down criteria to analyse the colleges and rank their performance. The resources available for teaching and instructions, the outreach, the infrastructure for research and studies, inclusivity, graduation results and public perception is considered towards preparing the list. The top IITs from the list have exceptional pedagogical methodologies and study resources that have been pivotal in the students into better performers.

Remember that scoring high grades in the exam and gaining a seat in the IIT entails an exhaustive preparation supported by professional tutors. The top 5 IITs in India are:

One of the IITs established in late the 1950s, IIT Madras tops the list of best IITs in India. It offers 09 B.Tech programs and has 505 seats. Winning the title of the best engineering college in India thrice consecutively, the college is undoubtedly number one in all aspects. It was established by the Government of India with the aid from the Government of West Germany in 1959. The institution is spread over 630 acres in South Chennai and has a strength of approximately 3000 students.

Sprawling over 325 acres of land in Hauz Khas, IIT Delhi was established in 1961. The institution offers excellent infrastructure and teaching resources. Offering 799 seats in 11 B.Tech programs, only the top few from the rank list can dream of studying in this great college. The Government of India has declared it as the Institute of National Importance (INI) under the Institutes of Technology (Amendment) Act, 1963.

The second IIT to be set up in India, in 1958, IIT Bombay was the first IIT that was established with foreign assistance. The support from the Government of USSR was the mainstay in the commencement of the college. The GoI declared it as the Institute of National Importance in 1961. The gradual growth of the college as one of the top three premium technical educational institutions has been the outcome of selfless efforts by the excellent faculty members and patrons. IITB offers 778 seats in 08 B.Tech programs.

IIT Kharagpur was the first IIT to be established in India. The then educational Maulana Abul Kalam Azad inaugurated the IIT in 1951 at Hijli, Kharagpur. With the motto Yogah Karmasu Kaushalam (Excellence in action is Yoga), the college is growing from strength to strength and extends exceptional education to the students. Having a certification from IITKGP can get you to the top of the world. IITKGP offers 15 B.Tech programs and 690 seats.

Established in 1959 with the motto Tamaso ma Jyotirgamaya (Lead me from darkness to light), the college has been in the top position for several years. Striving to extend the best possible education to students, IIT Kanpur could be your choice to obtain great accomplishments. The institution was a result of Indo-American educational program. IITK has 8 B.Tech programs and 713 seats. It has been identified as the Institute of National Importance (INI) by the GoI in 1958. Growing elegantly with outstanding results since inception IITK is one of the most preferred choices by top rank holders.

We have elaborated the top 5 IIT colleges in India, as per the rank declared by NIRF. Undoubtedly, every IIT in India has excellent educational standards and exceptional infrastructure facilities. Obtaining graduation certification from the IITs can provide you with a great future. Here are the books for IIT JEE preparation that you can refer for JEE exams.

Refer the table for the rank wise list of  23 IIT colleges in India, the total number of seats available there.

You have to be persistent with your preparation to score high grades in the entrance exam. Support and guidance from professional tutors at Alpha Entrance Academy can open your gates to the elite IITs in India. We are stating this from our experience for more than two decades.

Join entrance coaching at Alpha today and commence the journey towards your dream. 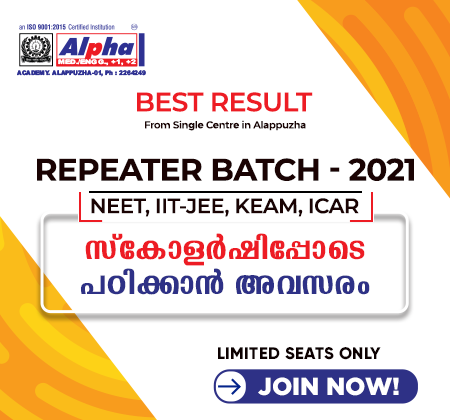 100% Scholarships for Students at Alpha

Only for limited students. Apply Now.

You have Successfully Subscribed!